In exciting racing, the fleet split early and a tactical race developed as the 17 Footers beat towards Wray.  ‘Fathom’ (helmed by Graham Murray) was first round the mark, closely followed by ‘Chameleon’ (helmed by Nigel Tullett) and ‘Pilgrim’ (helmed by Dave Milburn).  The breeze dropped for the downwind leg with ‘Fathom’ just holding a narrow lead over ‘Pilgrim’ and ‘Chameleon’.   Giving stiff competition was ‘Snark II’ (helmed by Les Gorton) who broke away from the chasing pack and closely battled with ‘Capella’ (helmed by Richard Thompson). 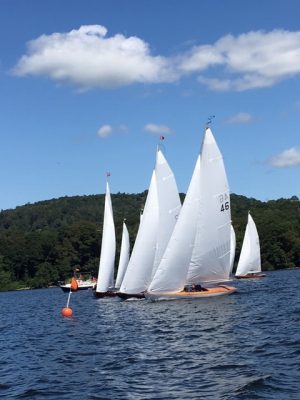 Meanwhile, the Flying Fifteens competed in the Sophie Rose Bowl on Sunday in the south lake in testing conditions with a wind of variable strength and direction.   In the first of two races, a real tussle took place between ‘Felix Felicis’ (helmed by Julian Newman), ‘Carbon Footprint’ (helmed by Phil Snewin) and ‘Pitch Perfect; (helmed by Dave Heron).    After the first windward mark, ‘Felix Felicis’ took the lead, with places changing in the variable winds.  Winning the first race was ‘Carbon Footprint’ with ‘Niffty’ (helmed by Nigel Tullett) in second place and ‘Pitch Perfect’ in third.

The second race started in similar conditions but in a wind that was steadily decreasing in strength.

‘Felix Felicis’ built a healthy lead after two legs, but was hotly pursued by ‘Niffty’. In very flukey conditions, ‘Felix Felicis’ hung on to the lead to win narrowly from ‘Niffty’ who came second.  ‘Carbon Footprint’ came third.

In contrast to the weekend weather, the dinghy fleet faced moderate to strong winds in last Thursday evening’s Dinghy Handicap race.  On a cool evening with a steadily increasing breeze, race officer Steve Bewsher set a new triangle windward-leeward course in the south Lake, using a dan-buoy to the east side of Roughholme Island as the leeward turning mark and sending the fleet south to Temple for the windward mark.

It was an action-packed, close race with ‘Dreamcatcher’ (a GP 14, helmed by Judith Gore) pulling ahead, followed by Nigel Hutchinson’s GP14 ‘Supersonic’ (helmed by Richard Thompson) and Nigel Hutchinson himself sailing his Solo in third place.     Amidst this stiff competition, the fast fleet were rapidly making up the 5 minute difference in start time and at the finish ‘Claude’ (an RS100, helmed by John Richardson) split the two leading GP14s (‘Dreamcatcher’ and ‘Supersonic’) for second place.  Nigel Hutchinson in his Solo came in 4th place.