The past week’s racing began with the third Denis Hope Handicap dinghy race of the season.  Competitors were faced with a light and very shifty south easterly breeze.  Racing took place in the north lake, where Race Officer Steve Bewsher set a windward/leeward course.   Adam Cowley in ‘Ffloozie’ (a Flying Fifteen) was first across the finish line but it was Nigel Hutchinson in ‘Super Sonic’ (GP 14) who won the race on handicap, crewed by Steve Dodwell.   Annie Jukes came second in her laser.   ‘Ffloozie’ (Adam Cowley) took third place on handicap although crossing the line first.    So far in the season, Gavin Tullett is in lead position on the leader board sailing a Laser Classic.

The arrival of the May Bank Holiday weekend saw all fleets out.   On Saturday, the Flying Fifteens had a tough race in strong north westerly breezes.    Coming first was ‘Niffty’ sailed by Graham Tullett and Tash Lister, followed by ‘Factor Fifteen’ (Frank Kelly), and ‘Ffloozie’ (Adam Cowley/Tim Foster).

Sunday saw the Flying Fifteens race in a west-north-west breeze which started light at about 9mph and strengthened throughout the afternoon. There were 2 races on Sunday on a course from Rough Holme to Belle Grange.

In the first of Sunday’s races, Julian Newman/Amanda Wilson came first in ‘Felix Felicis’ after leading the race throughout.   In second place came ‘No Illusions’ (John and Roseanne Walter), with a fierce battle for third place between ‘Flying Ferrett’ (Commodore Clare Houlihan and husband Tony) and ‘Ffloozie’ (Adam Cowley/Tim Foster).  ‘Ffloozie’ eventually came through to take third place!

In the second of Sunday’s races which saw near double the wind speeds, ‘Felix Felicis’ again led from the start.    ‘Flying Ferrett’ had a strong performance and Clare and Tony Houlihan and a very close race until they were overtaken by ‘No Illusions’ for third place. 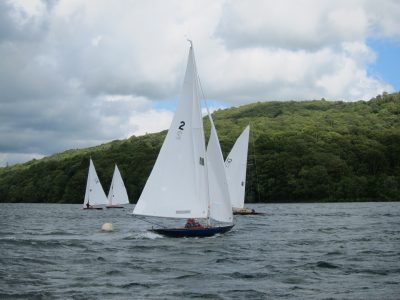 Bank Holiday Monday heralded the first of the Windermere Class Seventeen Foot races of the season and a large turnout.  Winds were light and north west but proved to be challenging and shifty. The race was sailed in the north lake, setting off from just south of Red Nab on the east shore.  The race became widely spread out with many changes in position due to the challenging and variable wind conditions.   ‘Lapwing’ helmed by John Pawson and crewed by Ian Bertram took an early lead which they continued and increased throughout the race, coming first almost 4 minutes ahead of the rest of the fleet.  In second place was ‘Liberty’ (Colin Bentley and John Richardson).  Strong performances were seen by ‘Fathom’ (Graham Murray and Paul Haslam) and ‘Nepenthe’ (Miles Logie and Mark Hillman). In keeping with tradition John Pawson as helm of the winning 17 Footer provided champagne to all members of the race and the race officers once back ashore.

Meanwhile, members of the Royal Windermere Yacht Club competed over the weekend in The 2019 British Keelboat League on Ullswater in a qualifier which kicked off the league in the North of England.