The Royal Windermere Yacht Club’s “Windermere 17 Foot Class” yachts were treated to near perfect sailing conditions when competing for the Lapwing Trophy on Saturday.  They raced in summer sunshine and a steady southerly breeze in the South Lake.

‘Falcon 11’ (helmed by Tony Rothwell) pulled out an impressive early lead which was held for most of the race. The rest of the fleet, chasing hard, exchanged positions in very close racing. They made the most of the windward leeward course, beating up to Beech Hill before running down to Seals. On the second downwind leg, the breeze filled in from the south allowing ‘Fathom’  (Graham Murray) to snatch the lead from ‘Falcon II’.  A final tack to the finish saw ‘Liberty’ (Colin Bentley) beat ‘Falcon II’ over the line by a just one second.  The results were ‘Fathom’ first, ‘Liberty’ second and ‘Falcon II’ third.

The cruiser fleet also had a great turnout on Saturday and exciting competition in perfect summer conditions.   A keen battle between first, second and third places took place up the first beat with ‘Va Va Voom’ (a Beneteau 21.7 sailed by Trevor Bonson) reaching the windward mark first.  ‘Slippery When Wet’ and ‘Heart Beat’ jostled for second and third, while ‘Ben O II’ and ‘Even Flow’ battled it out for 4th & 5th.   On the way to the second mark ‘Va Va Voom’ & ‘Heart Beat’ (also a Beneteau 21.7, sailed by John Smith) followed the Windermere Class 17 Footers and started heading to the wrong mark allowing ‘Slippery When Wet’ (an MG19 sailed by Craig and Jules Allwood) to take the lead in the race, which they maintained to the finish.   Second came ‘Va Va Voom’ and third ‘Heart Beat’.

Meanwhile on Sunday, the Flying Fifteens had an excellent turnout in force 2-3 conditions, a warm breeze and very pleasant temperatures.  Race officer Steve Bewsher set a zig zag course in the South Lake, starting near the Ferry and extending up to Storrs Temple. 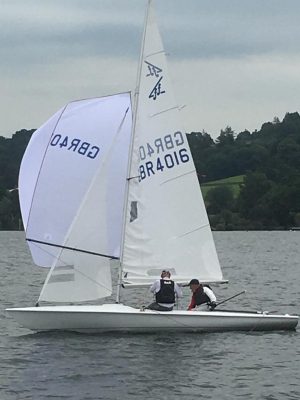 The race got off to a clean start with much jostling of positions up the first beat.  ‘No Illusions’ (John and Roseanne Walters) were first round the windward mark followed closely by ‘Pitch Perfect’ (David Heron and Chris Ducker), and ‘Niffty’ (Nigel and Jean Tullett).  This battle at the front of the fleet continued for the rest of the race. As the clouds rolled in and the rain and thunder started, ‘No Illusions’ came first followed by ‘Niffty’ and then ‘Pitch Perfect’

The onset of thunder and lightning led to the scheduled second race being cancelled and the fleet headed home in torrential rain! 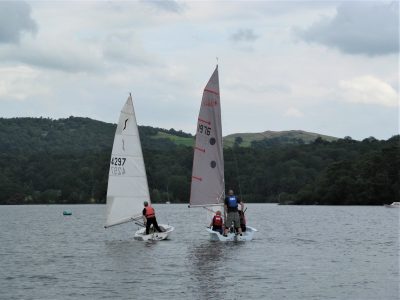 Two exciting dinghy races have been held over the last week. The first was last of the ‘GP14 Big Bash’ events. Along with 10 GP 14s, the race included a Devoti D-One, a Laser and the club’s own Bahia.