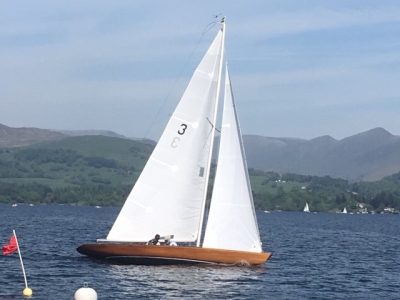 In the first of many Windermere Class (“17 Foot”) races, the Royal Windermere Yacht Club’s yachts faced challenging breezes when competing for the Rear Commodore’s prize.  Competition was close throughout the race, with ‘Chameleon’ (helmed by Nigel Tullett) beating the fleet home, closely followed by ‘Atholl’ (helmed by Nick Aubrey) in second place and Liberty (helmed by Colin Bentley) in third place.

As if this was just a ‘warm up’, the first of the season’s Race Weeks then followed with intense competition each day and record numbers of entries.    The fleet competed in the second series of the ‘Burchardt’ Cup.   Fourteen (14) Windermere Class 17 footers competed in the first race which took place in the North Lake in equally challenging conditions. A close tactical battle took place between Chameleon’ (helmed by Nigel Tullett) and Atholl (helmed by Nick Aubrey), with ‘Chameleon’ finally pulling ahead to win the race. In third place came ‘Falcon II’ (helmed by Tony Rothwell). 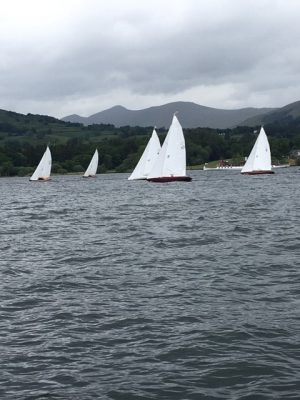 During the second day of Race Week, two 17 Foot class races were held.  Conditions were variable, with the second of the day’s races being a re-sail from earlier in the season.   Still in top form, ‘Chameleon’ (helmed by Nigel Tullett) came first again for the third time on consecutive days.   ‘Whisper’ helmed by the legendary Gay Crossley sailed an excellent race and came second, Waterwitch (helmed by Richard Broughton) came third and ‘Phantom’ helmed by Keith Barrow showing good form finished fourth.

In blustery conditions, Race Officer John Pollard set the fleet off on the second of the day’s races.  The lead changed many times between the front four yachts – ‘Chameleon’, ‘Fathom’, ‘Pilgrim’ and ‘Capella’.  The winning yacht was ‘Pilgrim’ helmed by Dave Milburn who had the post-race honour of providing champagne for all the crews and race officers.

Day three of Race Week saw the 17 Footers back in the South lake, this time fighting strong breezes of 25 knots and faced with driving rain.   Scoring a second win in a row, ‘Pilgrim’ (helmed by Dave Milburn) took first place followed by Chameleon (helmed by Nigel Tullett) in second, with ‘Phantom’ (helmed by Keith Barrow) in third.

At the end of Race week, the leader board stood as follows:   in first place overall was ‘Chameleon’ (helmed by Nigel Tullett), second place went to ‘Whisper’ (helmed by Gay Crossley) and third place to ‘Falcon II’ (helmed by Tony Rothwell). 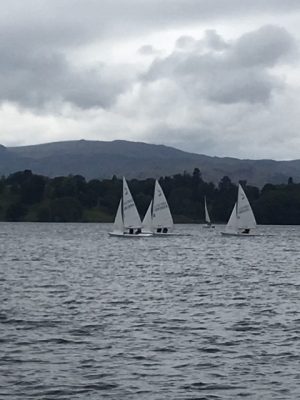 In the first of the Windermere 17 Foot competitions after Race Week, light rain and cloud characterised the day, with light southerly winds.  Race Officer Steve Bewsher set a course in the south lake with a good turnout.   ‘Fathom’ (helmed by Graham Murray) took an early lead and maintained it throughout the race.  ‘Whisper’ (helmed by Gay Crossley) chased hard, with the rest of the fleet close together in the very light breeze.  ‘Fathom’ went on to win the race, with ‘Whisper’ taking second place and ‘Liberty’ (helmed by Colin Bentley) coming third.