The Royal Windermere Yacht Club held the second of the season’s “Race Weeks” with strong competition and exciting weather conditions to challenge the best of the sailors!

Day 1 saw very strong southerly breezes and cloudy conditions for the Windermere Class 17 Foot fleet, which intensified throughout the race. Race Officer Steve Bewsher took the decision to shorten the course in the South Lake as the winds gusted to 30mph and more.  ‘Liberty’ (Colin Bentley) won the race, followed by Falcon II (Tony Rothwell) in second place, and ‘Capella’ (Nigel Thomson) in third.   Four yachts returned to their moorings or retired during the race because of the high winds.

Day 2 presented a completely different picture of weather with hot and sunny conditions.  In total contrast to the previous day, Race Officer Steve Bewsher had to delay the start of the first of the day’s two races in the South Lake until a light southerly breezed picked up.   The course set was windward leeward and competition was close until ‘Chameleon’ (Nigel Tullett) and ‘Fathom’ (Graham Murray) pulled ahead, coming first and second respectively.   The steady ‘Falcon II’ (Tony Rothwell) led the rest of the fleet into third place.   Amongst the classic boats, ‘Capella’ (Richard Thompson) came first, ‘Atholl’ (Nick Aubrey) second and ‘Waterwitch’ (Richard Broughton) third.    In the second race of the day, the breeze faded and the course was shortened.  ‘Chameleon’ and ‘Fathom’ continued their head-to-head battle, this time with ‘Fathom’ taking first place and ‘Chameleon’ second.  Among the rest of the fleet, everything was up for grabs and a near photo finish took place for third place, narrowly won by ‘Falcon II’.     Similarly, the racing was very close among the classic boats, with ‘Atholl’ taking first place, ‘Waterwitch’ second and ‘Capella’ third, although hotly pursued by ‘Whisper’ (Gay Crossley) on the downwind legs.

Day three also saw sunny conditions and extremely hot temperatures for the final day of Race Week. The fleet had glorious conditions and light-to-medium south westerly breezes for their two races in the South Lake, again with a windward leeward course set by Race Officer Steve Bewsher.   In the first of the day’s races, very stiff competition took place between ‘Pilgrim’ (David Milburn) and ‘Whisper’, chased hard by ‘Chameleon’. First across the finishing line was ‘Chameleon’, second ‘Pilgrim’ and third ‘Fathom’.   Among the classics, ‘Atholl’ finished first, ‘Snark II’ (Simon McVey) second and ‘Whisper’ third.   Race Week was rounded off with the second of the day’s races during which the breeze picked up and became blustery.   The fleet remained very close, especially around the marks on the course. ‘Chameleon’ showed an extremely impressive performance and came first, with ‘Fathom’ second and ‘Liberty’ (Robert Richardson) third.  Among the classics, ‘Atholl’ took another first, ‘Waterwitch’ came second and ‘Capella’ third. 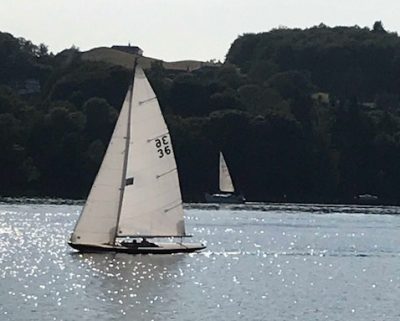 Meantime, the dinghies have also seen some exciting competition with ‘Ultra SONIC’ (Nigel Hutchinson) winning two of the recent races.  In the first race, an excellent afternoon’s competition took place with a moderate south easterly breeze.  Sailing in the North Lake, there was a very close battle for the top places, with the positions constantly changing.   Coming second after the Solo ‘Ultra SONIC’ were Julian and Claire Maclaine (sailing a GP 14), followed by Pat McVey and Angela Green (also sailing a GP14).  In the second of the dinghies’ recent races, the leader board was identical!