Robert Richardson wins Trophy in Royal Windermere Yacht Club’s RNLI Open Handicap Regatta
In a day of exciting racing, the Royal Windermere Yacht Club hosted the annual RNLI Open Handicap Regatta on Saturday 20 July with 21 boats from all classes taking part. All proceeds for entering this regatta were donated to the RNLI, with Maiden Marine kindly sponsoring the prizes.
Early rain cleared, leaving a day of cloud with sunshine and variable but predominantly westerly wind of varying strengths. Racing took place in the north lake with a course starting from Adelaide, going to Belle Grange then Fisherfield and back to Adelaide.
All 3 races were sailed in similar conditions with the wind gaining strength throughout the afternoon. All the competitors found conditions around the Belle Grange mark quite challenging as the mark is close to the leeward shore, and therefore the wind is very light and shifty. Throughout the rest of the course, conditions were good with some strong gusts which kept everyone on their toes!
The Regatta was open to all classes of boats and a real ‘menagerie’ of vessels entered, ranging from a Laser to a 34’ Jeanneau cruiser!
Each of the 3 races in the Regatta lasted about an hour. The three races took place ‘back to back’, with two handicap classes – one of dinghies and one of keelboats.
Race 1 was won by Robert Richardson sailing his RS100. In second place were Nigel & Gavin Tullett in ‘Niffty’ (a Flying Fifteen), followed in third by ‘Carbon Footprint’ (also a Flying Fifteen) sailed by Phil Snewin and Ros Coleman.
Race 2 saw the same three boats in the lead, this time with ‘Carbon Footprint’ coming first, Robert Richardson in his RS100 second, and ‘Niffty’ third.
Race 3 saw Robert Richardson win the race, followed in second place by Matt Nield sailing a Phantom, and third came another RS100 – this time with Robert’s father, John Richardson.
At the end of the regatta, the overall results for the classes of boats were:
• Dinghies: in overall first place was Robert Richardson (RS100), in second Matt Nield (Phantom) and in third John Richardson (also an RS100).
• Keelboats: ‘Carbon Footprint’ – a Flying Fifteen (Phil Snewin and Ros Coleman), ‘Niffty’ – also a Flying Fifteen (Nigel and Gavin Tullett), and ‘Moody Cow’ – a Hunter Sonata (Paul Harkness).
The overall winner of the Peter Glaister Memorial Trophy was Robert Richardson.

The Flying Fifteens were back out in force on Sunday for their weekly competition. In a strengthening SW breeze and a challenging course, the spirit was keen for the aptly named ‘Hot Chestnut’ Trophy. The Race Officer set a course with a long beat and some thrilling downwind legs.
In the first race of the afternoon, ‘Pitch Perfect’ (Dave Heron helming, crewed by Chris Ducker) was first around the windward mark. Behind them a battle developed between ‘Carbon Footprint’ (Phil Snewin and Ros Coleman) and ‘Funny Enuff’ (John Atkinson and Elizabeth Moreton) but neither could catch ‘Pitch Perfect’ which won by a comfortable margin. Second and third places went to ‘Carbon Footprint’ and ‘Funny Enuff’.
The wind increased as forecast for the second race with some of the fleet returning home early. The hardy competitors battled on with some very taxing laps. A really thrilling race was sailed in very challenging conditions. Competition was very close throughout the race. ‘Carbon Footprint’ won by a small margin, followed in second place by ‘Pitch Perfect’ and in third by ‘Factor Fifteen’ (Frank Kelly and Michelle Kay). 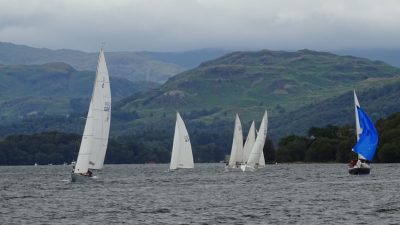 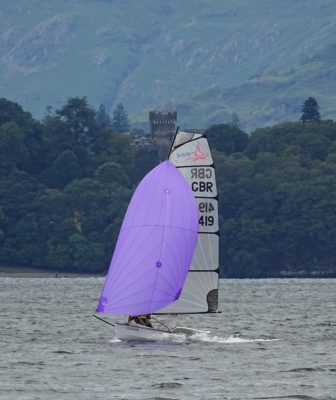 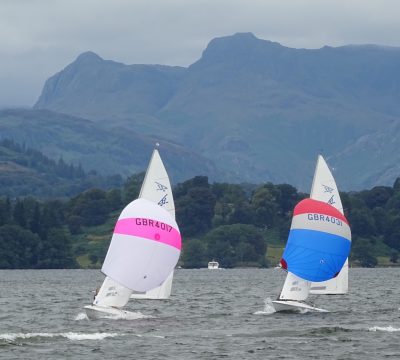 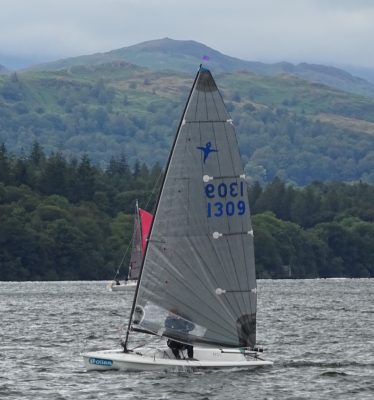