The Royal Windermere Yacht Club’s cruisers were out in force on the weekend, racing in testing and quite windy conditions in the south lake.   Any type of cruising yacht could take part in the race, with yachts as varied as a Hawk 20, a First 21.7 and a MG Club19 all involved. 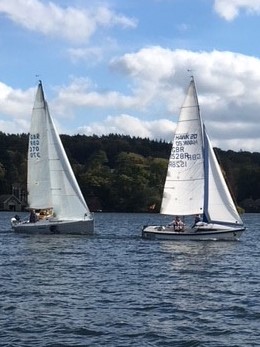 Nigel Tullett, normally competing in his Flying Fifteen ‘Niffty’, was Saturday’s Race Officer.  He set a windward-leeward course to challenge the competitors’ abilities in the stiff west-south-west breeze.   The competition was very close at first with ‘Kontiki’ (a Hawk 20 in the hands of Julian and Claire Maclaine) just ahead of the pack.   As the wind changed to a more south westerly direction, ‘Kontiki’ pulled further ahead and built up a substantial lead to take first place on the water and on handicap. Coming in second place was ‘Va Va Voom’, a First 21.7 (Trevor Bonson).

In parallel to the cruisers, the first of the weekend’s Flying Fifteens’ races also took place, again with Nigel Tullett as Race Officer.   ‘Felix Felicis’ (Julian Newman), ‘Flying Ferret’ (Clare Houlihan) and ‘Across the Lake’ (Miles Johnson) vied for top spot throughout the race, with ‘Felix Felicis’ eventually winning by putting clear water between closest rival ‘Flying Ferret’ which came in second.   ‘Across the Lake’ finished in third place.

Sunday saw Nigel Tullett back in his Flying Fifteen ‘Niffty’, having turned the reins of Race Officer role over to Mike Hynes.      Saturday’s breeze remained and Sunday’s conditions were described as ‘brisk’ although this time from the north west.     Racing in the north lake, ‘Niffty’ had a double victory winning both races. In carbon copy results, second place in both races went to ‘Pitch Perfect’ (Dave Heron) and third place to ‘Felix Felicis’ (Julian Newman) who had won on Saturday.

Unlike the weekend’s very windy conditions, last Thursday’s dinghy sailors were faced with the merest zephyr of a breeze when they began to race.   Race Officer Peter Gooch set a start line from one of the club’s pontoons, planning a short triangular course in the north lake.  Many thought they might be becalmed!   Within minutes of the start, Windermere showed its unpredictable hand and the wind suddenly increased dramatically at times.    Fierce gusts came from the north west with speeds of up to 20 knots, resulting in an exhilarating race.   Many of the dinghies planed downwards at high speed and several capsizes kept the rescue boat crew on their toes!     Playing to their strengths, the high performance single handed dinghies were in their element.   Son Robert Richardson in his RS100 had a clean sweep and soared to victory, followed by father John Richardson in second place and also in a RS100.   Nick Heather, again single-handed and in an RS100, took third place.