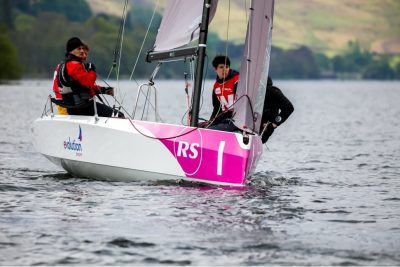 Four Royal Windermere Yacht Club sailors formed a team for the new British Keelboat League which is supported by both the RYA and RS Sailing.   This is a national inter-club racing competition which provides sailors with the opportunity to race against other teams from around the country.  They all sail in identical RS21 keelboats.   Teams rotate around the fleet of boats in a series of 20 short ‘sprint’ races, each lasting 15 minutes.

Over the 2 days of the northern heat, held on Ullswater, the Royal Windermere Yacht Club’s Nigel Tullett, Nick Heather, Robert Richardson and Zach Shirra sailed in 20 races.  On day one, light and shifty winds required good tactics and boat-handling, with both Nigel Tullett and Nick Heather alternating at the helm.    At the end of the first day, the Royal Windermere sailors were in second place.

Back on Windermere, the dinghies were out on Thursday which proved to be a chilly evening with a very light breeze.   A 90 degree wind shift during the starting sequence caused Race Officer Steve Bewsher to postpone the start and change the course from a starboard hand to a port hand race.

After a good start by Nigel Hutchinson in his Solo ‘Ultra SONIC’, Simon McVey in his GP14 ‘Dreamcatcher’ crossed the line first with two asymetric boats hot on their heels in the final stages.  However, ‘Ultra-SONIC’ was declared the winner on handicap, with ‘Dreamcatcher’ in second place.  ‘Claude’ (John Richardson) came in third place.