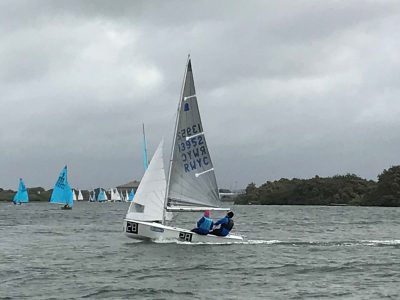 This 24-hour race is a serious test of endurance for classic dinghies, with 77 teams from around the UK taking part in the non-stop racing and using various types of dinghy.  The Royal Windermere Yacht Club entered a GP14.     Over the race, 15 helms and crews from the Club each sailed two shifts of between 90 minutes and two hours.

The weekend started with gusty conditions on Saturday.   Well known Royal Windermere sailors Amanda Wilson and Anna Clough started the race as the first ‘shift’.   The forecast of lighter winds proved accurate and the Club’s strategy for these conditions was to use lighter crews and sailors newer to the event who had the chance to sail during daylight hours on Saturday and familiarise themselves with the course and the boat

Sunday morning’s predicted weather change saw a substantial increase in the wind, with 30mph gusts making conditions extremely challenging.  The race saw numerous incidents and capsizes which made interesting viewing for the many spectators.

Crossing finishing line for the Club were Richard Thompson and Jonny McVey, coming in 26th place out of the 77 clubs.

In addition to the 14 people taking part in the race, a further five people from the club worked tirelessly ‘behind the scenes’ to support the sailors throughout the weekend.

In other racing news back on Windermere, Saturday’s Windermere Class 17 Foot race was won by ‘Liberty’ (Colin Bentley helming) with ‘Falcon II’ (Tony Rothwell at the helm, crewed by Steve Bewsher) coming in second place.