Starting with the ’17 Footers’:    setting a windward-leeward course in the North Lake for the first of two Windermere Class 17 Foot competitions, Race Officer and immediate Past Commodore Simon McVey did a sterling job starting the fleet in the variable conditions.  With two races planned for the Caprice Salver and Chameleon trophies, the course was short but challenging.   At the first mark, it was a close call between ‘Chameleon’ (Nigel Tullett) and ‘Pilgrim’ (David Milburn), with ‘Chameleon’ taking the lead by a boat’s length.    There was intense competition between the rest of the fleet but no one could catch the leading pair.  The race was won by ‘Chameleon’ (Nigel Tullett), with ‘Pilgrim (David Milburn) coming second and ‘Liberty’ (Colin Bentley) third. 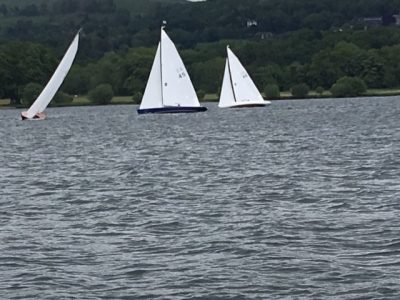 With the wind becoming more westerly, for the second race Simon McVey (as Race Officer) moved the start line to Millerground.  He set a course which saw the fleet beating to Red Nab, reaching across the Swans Nest and then another beat to Wray before heading down wind to Millerground. Almost mirroring the first race, the second race saw very similar positions continue with ‘Pilgrim’ (David Milburn) and ‘Chameleon’ (Nigel Tullett) jockeying for the lead.   At the top mark, ‘Phantom’ (Keith Barrow) was third around the mark.   As the wind conditions slowly eased, Race Officer Steve McVey shortened the course.   ‘Chameleon’ (Nigel Tullett) narrowly managed to hold off ‘Pilgrim’ (David Milburn) to take first place.   Second and third positions were identical to the first race.

The second of the Flying Fifteens’ races followed a shorter course but in no less challenging conditions.    ‘Pitch Perfect’ (Dave Heron and Richard Rigg) led for most of the first lap before ‘Niffty’ (helmed by Nigel Tullett) came through on the next beat. After that it was a tussle all the way round with ‘Niffty’ just getting the better of those in hot pursuit.   ‘Pitch Perfect’ (David Heron) came second and ‘Flying Ferrett’ (Commodore Clare Houlihan at helm, husband Tony crewing) third.  Competitors described the racing as ‘lovely but a challenging afternoon.”