Royal Windermere Yacht Club Encourages Everyone to
‘Try Sailing in May’

The Royal Windermere Yacht Club has been hosting a series of events to attract adults and youth to ‘take to the water’.   “Members of the youth sailing squad (picture attached showing close quarters manoeuvring) are having a fantastic time on the water”, says Club Commodore Clare Houlihan.    The club runs youth sailing programmes in blocks of 8 sessions, twice a year.   Youth aged from 8 to 16 are welcome. 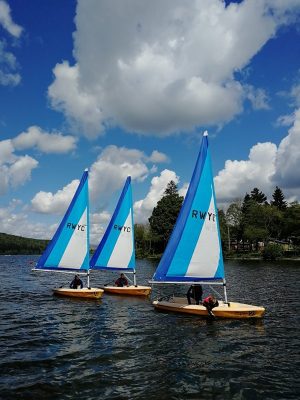 Also this week, the club has participated in the Royal Yachting Association’s “Push the Boat Out” initiatives, where people of all ages and abilities are encouraged to go on the water.  ‘Try sailing in May’ is a motto for the month – and where better than glorious Windermere!

Meanwhile, the club’s cruiser class has been actively competing in recent races.    In this class, any type of cruiser yacht can compete.  The size and ability of each type of boat is assessed at the start of the season and a handicap system applied to ensure fair and equitable racing.     Class Captain Craig Allwood commented:  “In sunshine with light cloud and 10-14 light to moderate winds, the cruisers battled out stiff competition with ‘Va Voom’ (a Beneteau 21.7, helmed by Trevor Bonson) taking the lead early on and maintaining this to take first place.  Meanwhile, the positions for second and third places changed during the race with ‘Kontiki’ (a Hawk 20 helmed by Julian Maclaine) coming second and ‘Heartbeat’ (a Beneteau 21.7 helmed by John Burns) coming third.

The dinghy fleet raced several times – starting with a race on Thursday evening which saw easterly, very gusty conditions.  The fleet raced in the North Lake.  The conditions proved challenging to some, if not to class captain Robert Richardson who won both on the water and on handicap in his RS 100.   Second place went to Judith Gore in her GP 14 and third place to Harry Frith.

On Sunday, two handicap dinghy races also took place in the North Lake but this time with light westerly winds.   The first race was won by Judith Gore in ‘Dreamcatcher’ (a GP 14), followed in second place by Nigel Hutchinson in his Solo ‘Ultra SONIC’.  John Richardson came in third place in his RS100.    The second of Sunday’s races was won by Peter Frith sailing his single hander RS Vareo. John Richardson came second, Peter Wright was in third place in his Devoti D One.

Anyone interested in sailing should contact the Royal Windermere Yacht Club and all abilities from novices to experienced sailors are welcomed, details can be found on the club’s website:   https://www.royal-windermere.co.uk/