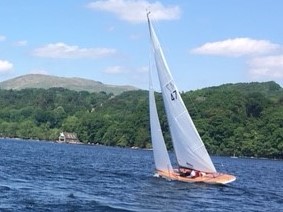 In the overall 17 Foot Class series of races this season, “Fathom” and “Chameleon” (in the hands of Nigel Tullett) continue to battle it out for top spot as keen competition continues in the weekly races.

With the glorious weather and good wind conditions over the past week, every class of yacht has been out on the water with much competition and exciting racing.

There have been three ‘Flying Fifteens’ races this week with the following results:

In the overall Flying Fifteen’s series of races, Nigel Tullett in “Niffty” is still in the lead, followed by “Carbon Footprint”.

In the Thursday night Dinghy handicap race this week (where each type of dinghy is given a handicap according to its size and performance levels), Robert Richardson won in his RS100, with Nigel Hutchinson in his Solo coming in second place, and John Pawson in a GP14 in third.

The cruisers had a great time on Saturday 9th June with Claire and Julian Maclaine winning in “Kontiki” (a Hawk 20), Ted Parker coming second in “Ben 0 2”, and class captain Craig Allwood third in “Slippery When Wet”.   All three finished within 3 minutes of each other!

In other news from the Royal Windermere Yacht Club, the annual “Picnic by Boat” took place on Saturday 9th June in idyllic conditions.   Members of the club took to a variety of different craft and sailed to Rawlinsons Nab, rafting up together for everyone to enjoy an evening of camaraderie and shared picnics, together with some recreational paddle-boarding to round the evening off.