The Royal Windermere Yacht Club’s Windermere 17 class yachts were scheduled for two races on the weekend but were thwarted by the very light breeze!  Only one race was completed. 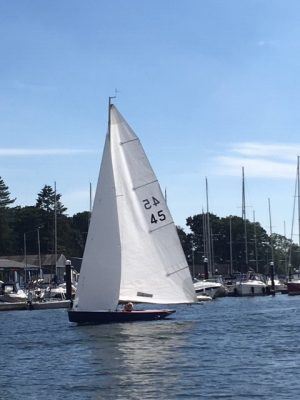 ‘Pilgrim’ helmed by Dave Milburn took an early lead but was then caught in a lighter patch of breeze allowing some of the fleet to take advantage.  ‘Atholl’ (helmed by Nick Aubrey) was the first boat around the top mark, closely followed by ‘Falcon 11’ (helmed by Tony Rothwell).    On the downwind leg ‘Waterwitch’ (helmed by Richard Broughton), ‘Pilgrim’ and ‘Whisper’ (a classic 17 footer helmed by Gay Crossley) all exchanged positions, closely followed by ‘Capella’, ‘Mistral’ and ‘Snark 11’.

‘Atholl’ pulled further ahead and finished in first place overall with ‘Falcon 11’ in second and ‘Pilgrim’ in third.

Among the classic fleet competitors, ‘Atholl’ was first overall (and first of the classics), ‘Waterwitch’ in second and ‘Whisper’ in third.

With the breeze dying completely after the first race, the fleet took advantage of the early finish enjoying a very pleasant race debrief back at the yacht club bar!  The club then hosted the annual ‘Picnic by Boat’ with a flotilla of vessels heading into the south lake with picnics on a glorious summer evening.   The flotilla included sailing boats, power boats, a former harbour launch, paddleboards and a kayak – all bearing picnics for the evening!