The Royal Windermere Yacht Club’s ‘Windermere 17 foot class’ yachts, dinghies and cruisers all enjoyed keen racing over the past week, with glorious conditions and perfect winds throughout the weekend, after a challenging evening for the dinghies at the end of the week.

Warm temperatures, a steady southerly breeze and plenty of sunshine set the conditions for Saturday’s ’17 Foot’ racing.  Race Officer John Caffrey set a windward-leeward course in the south lake, with the fleet beating to Beech Hill then downwind to Seals.  The steady breeze made for a highly competitive race, with ‘Falcon II’ (helmed by Tony Rothwell) taking an early lead which was maintained throughout the race and gave ‘Falcon II’ first place.  [Photo below] ‘Chameleon’ (helmed by Nigel Tullett) sailed a very close race and came second, followed by ‘Pilgrim’ (helmed by David Milburn) in third place.      It was an equally close race between the next three competitors: ‘Whisper’ (helmed by Gay Crossley), ‘Liberty’ (helmed by Colin Bentley) and ‘Atholl’ (helmed by Roy Gambie). 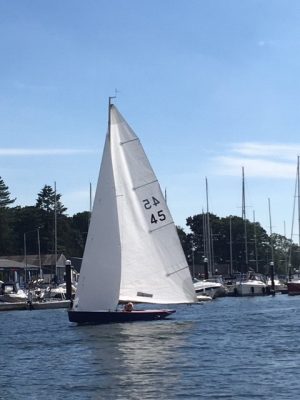 With the Windermere 17 foot class season  almost at the half way point, ‘Chameleon’ (Nigel Tullett) is in the lead overall followed by ‘Liberty’ (Colin Bentley) in second place and ‘Fathom’ (Graham Murray) in third place.   Amongst the ‘classic’ Windermere class yachts, the leader board is headed by ‘Atholl’ (Nick Aubrey), ‘Whisper’ (Gay Crossley) and ‘Waterwitch’ (Richard Broughton).

Meanwhile, in the cruiser race, also in the south lake in lovely weekend conditions, the fleet competed in a southerly breeze on a triangle/windward-leeward course.  ‘Slippery When Wet’ (an MG Club 19, helmed by Craig Allwood) was the clear winner, while a good battle took place for second and third positions.  In second place came ‘Va Va Voom’ (a Beneteau 21.7, helmed by Trevor Bonson) and in third place came ‘Silver Mist’ (a Hanse 32, helmed by Nigel Smith).

The dinghies saw two keen races during the week.  In the ‘Denis Hope Handicap’ race, very windy and challenging conditions earlier in the week faced the fleet in the south lake.   Robert Richardson was the clear winner by being the only dinghy to keep his mast pointing the right way!