A team from the Royal Windermere Yacht Club took part in the British Keelboat League National Final at Queen Mary Reservoir, hosted by the Royal Thames Yacht Club.
The Finals were sailed in a fleet of eight (8) new RS21 keelboats, with teams rotating between the boats over 3 days. A total of 44 short sprint races were held with each of the team competing sixteen (16) windward/leeward courses. Racing was in testing windy conditions with use of the asymmetric spinnakers limited in the windiest of races.
The Royal Windermere team consisted of Nick Heather, Nigel Tullett, Gavin Tullett and Robert Richardson. They had competed successfully in the keelboat qualifying event on Ullswater in June 2019, one of 7 qualifiers throughout the UK.
The Royal Windermere’s team had been in the top 4 for most of the event; with no discards it came down to the last few races. The team came sixth overall, with only four points separating the 2nd to 6th places.
Also racing at the Finals was Harry Frith (another Royal Windermere sailor) who competed for Newcastle University Academy and came in 7th place.
Meanwhile, back on Windermere the Club’s cruisers and dinghies also raced this weekend; the Flying Fifteens called off their race on Sunday in inclement weather conditions.
For the cruisers, it was the last of the season’s inter-club races. Conditions were favourable on Saturday with a good breeze and lovely sunshine. Racing was very close. ‘Slippery When Wet’ (Craig and Jules Allwood) took first place, with the Royal Windermere’s ‘Va Va Voom’ coming fourth’ and ‘Heart Beat’ fifth. On Sunday, conditions were considerably wetter and more challenging for the cruisers. Winds gusted to over 20mph during the 2 races, both sailed in the north lake. Racing was close right up to the finish line. ‘Slippery When Wet’ won both races and the weekend ‘first’.
Sunday also saw the Royal Windermere Yacht Club’s dinghies out in challenging conditions. Two races were held in the north lake in blustery NNW breezes. Race Officer Steve Bewsher set a triangular course for each race. In the first, John Richardson (sailing his RS100) was off to his customary quick start, only to capsize at the first windward mark and completely wrap his mainsheet around the buoy. This resulted in an unscheduled swim for John in order to unwrap the ‘knitting’ before resuming the race. Phil Hubbard (sailing his Devoti D1) took advantage of John’s delay, crossing the finishing line first. Second across the line was John Pawson in his GP14. After the handicap was applied, John Pawson was declared winner, Phil Hubbard second and Pat McVey third.
The second of Sunday’s dinghy races brought a moderation in the wind and improved skies. Again, the dinghies sailed a triangular course. Avoiding a second capsize, John Richardson took the lead and was first to cross the finishing line, followed by Phil Hubbard. After handicaps were applied, John Pawson was declared the winner, John Richardson second and Pat McVey again third. 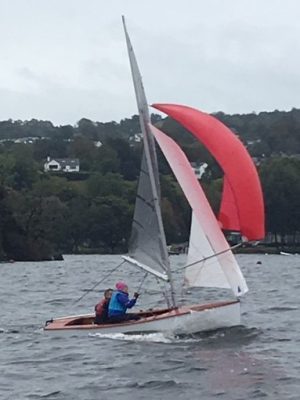