Bringing the racing season to a close, the Royal Windermere Yacht Club held its annual Prize-giving Ceremony and Dinner on Saturday, 16 November 2019. During the season, club members across the club’s five different fleets of yachts competed for 175 prizes, with a further 8 prizes awarded for special races.
Commenting on the year’s sailing Commodore Clare Houlihan said: “It has been a season of great contrasts, ranging from the most perfect weather conditions to periods of extreme weather. Our fleets have completed all their races here on Windermere, with some outstanding performances. Further afield, our sailors have competed at national and international level throughout the UK and Ireland.”
She added: “I have been proud to serve as Commodore this year, the third generation in my family to do so.” Helming a Flying Fifteen boat ‘Flying Ferret’, Clare and husband Tony won the Hot Chestnut Trophy and Dove Nest Trophy. An adept sailor since a young age, Clare regularly lends a hand as crew in the Windermere Class races while Tony is an accomplished Race Officer, setting courses on the lake and monitoring the results.
“While every competitor in every race is a ‘winner’ in my eyes,” adds Clare, “some of the most notable achievements of the year include:
• Nigel Tullett, winning 10 major prizes in the Windermere Class 17 Foot races in ‘Chameleon’, and also taking the Prince of Wales Feathers in the Flying Fifteen class in ‘Niffty’ for the highest average points in the club for the entire season
• David Milburn taking the Points Cup and Spray Trophy for the most improved results this season in ‘Pilgrim’
• Nick Aubrey and Roy Gambie, winners of the classic boats in the Windermere Class 17 Foot races in ‘Atholl’
• Julian Newman and Amanda Wilson taking the trophy for the highest points in the Flying Fifteen class in ‘Felix Felicis’
• Adam Cowley, winner of the classic boats in the Flying Fifteens races in ‘Floozie’
• Nigel Hutchinson, winner of the Dinghy Handicap class in ‘UltraSONIC’ and also awarded a special trophy for his work on adult training to encourage new and existing members to learn to sail
• Amanda Wilson in ‘Crackerjack’, John Pawson and Lisa Knaggs in ‘Horizon’, Harry and Ian Frith in ‘Second Chance’, and John and Robert Richardson in ‘Spirit’ – all of whom are prize-winners in the GP 14 fleet
• Last but by no means least, Trevor Bonson winning the Cruiser fleet prizes in Va Voom.

With so many races and prizes, just a few of the prize-winners gathered for a photograph (ATTACHED) on Saturday night, with special recognition to: 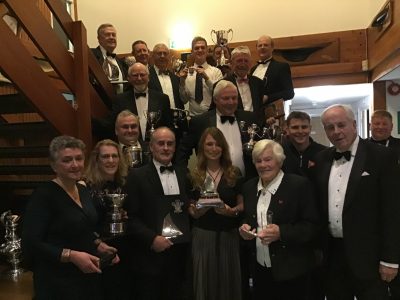